The 2020 celebration of graduating LGBTIQA+ students, Sexuality Studies minors, and their allies was originally planned for Sunday, May 3rd at the FedEx Global Education Center Mandela Auditorium. Due to COVID-19 pandemic, it was rescheduled to 2:00p.m. on Sunday, May 17th, 2020, via Zoom. Registered participants were given a link to share with their guests. 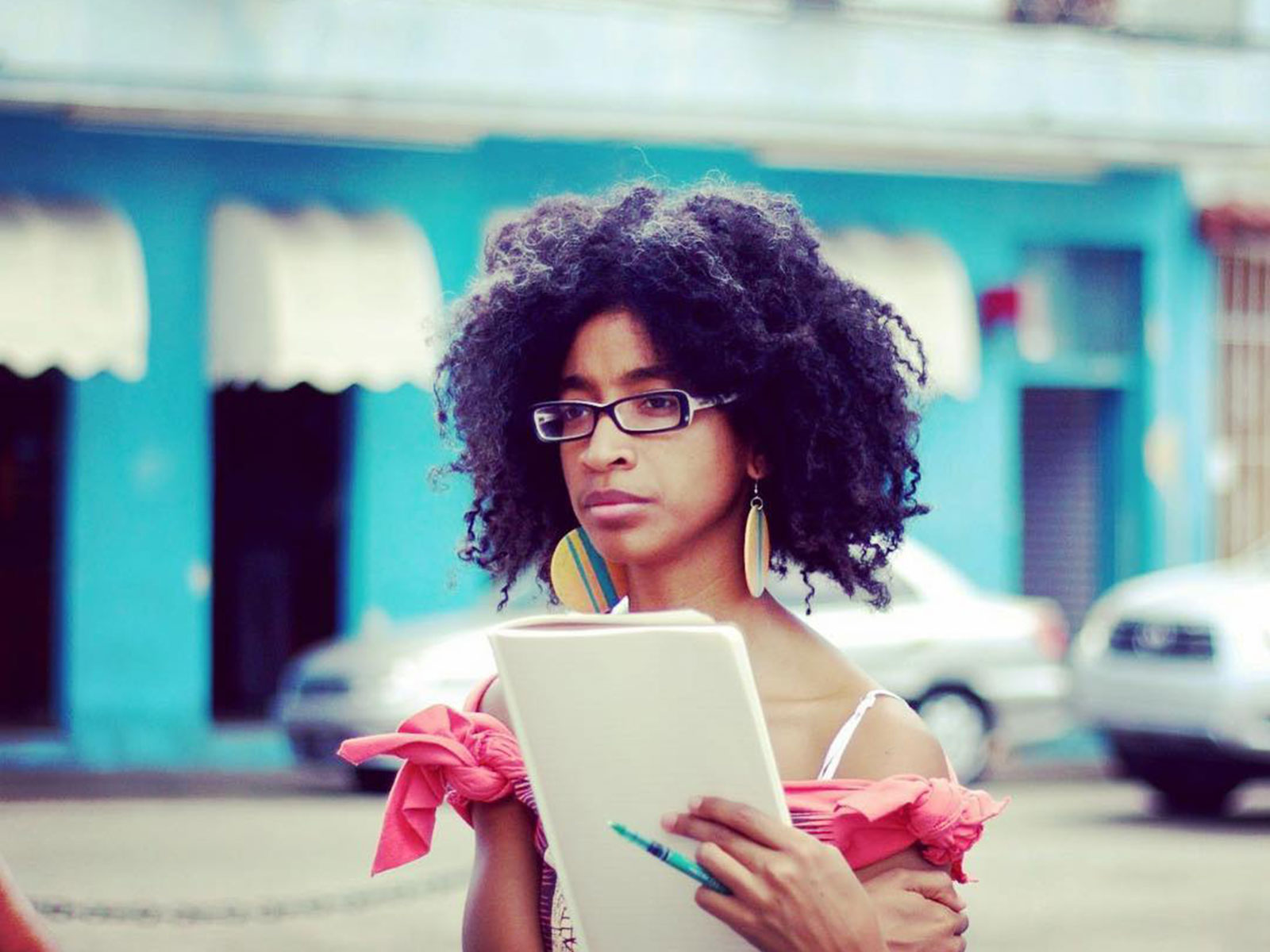 Dr. Alexis Pauline Gumbs is a queer black trouble-maker and a black feminist love evangelist. She walks in the legacy of black lady school teachers in post slavery communities who offered sacred educational space to the intergenerational newly free in exchange for the random necessities of life. As the first person to do archival research in the papers of Audre Lorde, June Jordan and Lucille Clifton while achieving her PhD in English, Africana Studies and Women’s Studies at Duke University, she honors the lives and creative works of Black feminist geniuses as sacred texts for all people. She believes that in the time we live in, access to the intersectional holistic brilliance of the black feminist tradition is as crucial as learning how to read.

Many thanks to 2020 co-sponsors The Carolina Women's Center and Arts Everywhere for their help with this year's ceremony.

Read or Watch the Keynote Speech

Hearing from Dr. Alexis Pauline Gumbs is always a treat. As the nature of this 2020 celebration necessitated recording and transcribing her comments, Dr. Gumbs has given us permission to publish this content for the benefit of future Lavender Graduates, the broader campus community, and anyone seeking messages of love, care, freedom, and bravery inspired by the lives of Black LGBTQ ancestors.

Congratulations! Love to each of you LGBTQQI graduates of the University of North Carolina at Chapel Hill Class of 2020!

You have just done something that maybe no one has ever done before. You have graduated, out and proud, in the middle of a global pandemic. And though, at the beginning of the 20th century during the flu epidemic, I’m sure some people did graduate from college … very few of them were out and proud and I don’t think any of them had a Lavender Graduation. So congratulations! You are innovators, you are forebears, in a way that I don’t think you or any of us would have imagined when you wrote your application to come to UNC.

The insight that you have is leadership for generations. And I don’t know what it’s like to experience your graduation from the comfort or discomfort of home, or whatever hopefully safe place you are watching this from. I don’t know the small things and the large things that you did in order to love yourselves and support each other through this time. But I do know that whatever you learn on your worst day is insight that we all need for the days to come. So I honor you as leaders.

And though in a very important way, you are the first of your kind, you are also held, loved, and supported by generations of queer visionaries who were the first in a certain context - in a certain circumstance - and who had to figure out what it was to be who they were in their time, one moment at a time. And so, as a self-identified Queer Black Trouble-Maker and Black Feminist Love Evangelist; as an obedient daughter on ancestral assignment; I am here as an emissary and a portal bringing generations of Queer love to you. Especially the love of those Black LGBTQ visionaries and artists who are the core of my work and who are my guides every day.

So I start by bringing you the love of Melvin Dixon. Melvin Dixon was a Black Gay literary critic, creative writer, novelist, poet. And at the very last speech he gave, when he knew he would pass away soon from complications due to H.I.V., he spoke to his gathered community at the Out Right Conference in 1992 and he called into the future. He said, “I may not be at this conference next year. I may not be at any of the wonderful Queer events that are coming up in the future, but I’ll be somewhere listening for my name.” And at the end of his speech he said, “You then, by the broadness of your vision and the possibility of your good health are charged to remember us.” What is your charge? I know a lot of us are holding people who have transitioned as part of this great migration of souls at this time. We remember them. I know we are charged to remember those who are impacted by this virus in very different ways than we are personally impacted by it. We’re charged by the possibility of our good health to remember. And though Melvin Dixon knew that this was going to be the last large gathering that he would attend during his lifetime, many of us don’t know when we’ll see each other again. We didn’t know at the last large gathering that we went to that it would be the last indefinitely. And so may the love, the foresight, and the wisdom of Melvin Dixon be with you as you navigate these unprecedented times; as you remember all those who are calling you to be part of the broadness of your vision.

I bring you the love of the firebrand Pauli Murray. Durham, North Carolina’s own. Pauli Murray, who would go on to become the great civil rights lawyer, legal theorist, theologian … tried to go to UNC-Chapel Hill and was denied because of the color of their skin. Pauli Murray who was actually the great-grandchild of some of the founders of the municipality of Chapel Hill - the slave-holding founders of the University of North Carolina - was denied admittance because of segregation. Pauli Murray, who would go on to preach about the infinite gender potentiality of each of us the reality of a non-binary God, first sat in church at The Chapel of the Cross right there on UNC’s campus. And yet, the doors to that great institution that you will all be receiving degrees from soon, was not open to Pauli Murray. Pauli Murray preached when she became ordained as the first Black woman to be ordained as an Episcopal priest, and who is now canonized as an Episcopal saint. Pauli Murray preached that we should be free to be “wholly” - with a “w” like “whole” but “holy” as in divine - and that every breath was a prayer. May the wisdom of Pauli Murray be with you as you continue to be your whole self; as you honor in this moment the clarity that every breath is a prayer. In fact let’s take a deep breath right now: inhale with me and exhale . Every breath is sacred.

And so I bring you the love of June Jordan -  the great poet, incredible feminist activist, a believer in transnational solidarity - who said in 1977 that “love is lifeforce.” What really keeps you alive? June Jordan said it was love. She talked about love as that energy that causes the lilies in one field and the lilies in another field somewhere else to bloom on the same day in spring. And what would it mean for us in this moment to remember or to learn for the first time what it is to act as a species, interconnected by love, to each other? Interconnected to every other species on the planet, by love? What would it mean to get into loving, peaceable, relationship with the many species of this planet who are relieved that our species is making slightly less of an impact than it has been for the past century? May the wisdom of June Jordan be with you as you cultivate that crucial form of lifeforce. We call it love.

And I bring you the love of Essex Hemphill: Black, Gay prophet! Who, during the Act Up! years of raising their voices against the silence around the H.I.V./A.I.D.S. epidemic, wrote in his beautiful book of poems, Ceremonies, “I love myself enough to be who I am.” May you love yourself enough to be who you are. May you love yourself enough to have space to think about the gaps between who you are and even what you thought you were training for, before this moment. May love give you the space to step into what this time is calling for, from you; and who is it that you are such that we can move forward transformed by this moment; and transforming our world, informed by this moment.

I bring you the love of Joseph Beam: Black, Gay poet and activist; editor of the very first anthology of Black Gay mens’ writing ever. Who said, “I dare myself to dream.” Can you say that with me? I dare myself to dream. And may the energy of Joseph Beam be with you as you dream what comes next after this moment. As you trust the insight not of what it means to react, not to what's happening now, but of the dreams that have been with you since before. The dreams that you now see more clearly, because a linear path has now been irrevocably disrupted. May the faith of Joseph Beam be with you as you populate our future with your dreams.

And finally, I bring you the love of Marsha P. Johnson. Marsha P. Johnson who, as a Black Trans woman, opened her heart to care for multitudes of young people who were kicked out of their homes for defying gender norms. told her community, and told them in the court of law, to “pay it no mind.” Sometimes Marsha P. Johnson’s full name is “Marsha Pay it No Mind Johnson.” And after I’ve just been handing you the weight of the entire future: your dreams, the beauty that you’re going to impose on it, the love as life force that you’re going to cultivate, the power of love and the freedom to be wholly; I also want you just to have the freedom to release what is not yours, what does not belong to you, what does not serve you, anything negative that is imposed upon you from outside. Pay it no mind. Even anything I’ve said to you today that doesn’t actually resonate with your spirit: pay it no mind. Marsha P. Johnson taught us to clear a space so that we could be who we are despite the barriers and constrictions that others might impose upon us. May the spirit of Marsha P. Johnson be with you as you enact your freedom; as you love yourself well; as you put at the center of your life that which feeds you, nurtures you, loves you back!

I am so proud of each of you. Not just as a Lavender Graduate at some point myself, but also on behalf of generations of folks who are here celebrating with you. Wherever you are, you are not celebrating this moment alone. You are surrounded by multitudes of love, care, freedom, and bravery. I offer you my love. I offer you the universe. Congratulations!

This is an incomplete list of participants in the 2020 Lavender Graduation ceremony. Nearly every year, some participants are unable to be publicly "out" about their membership in or allyship with LGBTIQA+ communities because of varying levels of stigma in their families, social circles,workplaces, religious communities, and/or geographical location. Part of our work is to mitigate and end this barrier so that people of every sexual orientation, gender identity, and gender expression can participate fully in their communities and societies without discrimination.